Why I Pick Choice, part 4

This is part four of a week long series on choice in the art room...


Why I Pick Choice by Melissa Purtee

I spent eight years as an elementary art teacher in some challenging schools. You know the sort - high poverty, high ELL population, lots of discipline problems. I stumbled over TAB when doing some research and thought that would never work with “my kids”. I pictured all the behavior issues that I dealt with on a daily basis exploding into chaos if I gave students more freedom. Something stuck in my head, however, because my lesson kept getting more open.

As my teaching evolved so did my classroom management. I became a big fan of PBIS (Positive Behavior Intervention and Support) and implemented many of its tenants in my classroom. One of the strategies I tried was behavioral incentives. When a group had a number of classes where my behavioral expectations were met the students got to pick the medium for the next class.

When the class came in and started working I was shocked - all of them were engaged, focused and making art. No one had problems deciding what to make, they cleaned up after themselves and they were collaborating. I spent this class walking around in wonder, shocked at how well it was going, so it was no surprise that it was almost the end of class when I noticed Darius.

Darius had been my student since first grade. He wasn’t necessarily bad, but he did spend most of his art time talking and did the minimum amount of work on each project. He threw most of his artwork in the trash on the way out of the door. Now, however, he was sitting at the sculpture center, silently engrossed with the folding of an intricate paper air plane.

“Your work is beautiful”, I told him.

“Thanks Ms. Purtee”, he said with an ear to ear grin.

“Darius”, I asked, “if art would have been like this every week would you have like my class?’

“ I would have loved it,” he answered.

In that moment I knew I had to go full choice. Of course, it wasn’t always as perfect as the class I’ve just described but it did always make art challenging, fun and accessible for all my students. I loved it and so did the kids, who took ownership of their art making and excelled. I noticed the biggest change in students who weren't as successful with drawing and painting. The suddenly had a way to express themselves. Everyone was able to find their niche somewhere, to feel like they belonged.

When the opportunity to teach at Apex High School fell in my lap I jumped at the chance. I knew that I wanted to try out some of the ideas that had worked so well at the Elementary level in High School. Some of the things that I’ve tried have been great, others have needed tweeking. I plan to keep on trying out new ideas. As Ian Sands says - I don't want to teach art, I want to make artists. 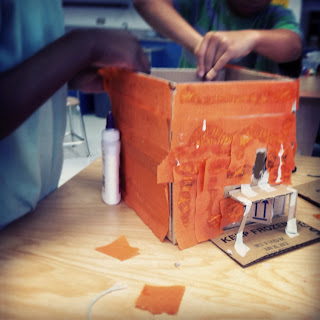