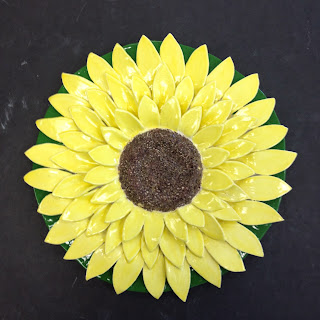 I chose to use clay as my medium just because I really love working with clay and I thought it would achieve the final product i wanted the best. After my clay piece came out of the kiln I wasn't sure whether I wanted to use glaxe or paint but since I used paint on my vessel project I decided to just switch it up. I think the thing I'm most proud of is the center and the texture it has there. One thing I would change is to make sure and be absoultely positive I have it centered and even.

Nature Art:
Nature art, means exactly what its called, a form of art using things you find out in nature. You create something out of what you kind find in the environment you are and then just leave it and let it go, it's temporary. I got the idea for my project because i kind of wanted to created a flower or "plant," using other flowers and plants. 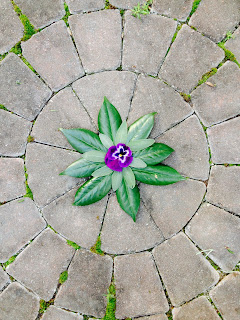 The first picture (above) is everything I just found in my backyard, and the one below is after I added some white paint just to add some detail. I wish I would've realized before I plucked the flower that I could've found one laying around that was already disconnected so I didnt have to kill it, so next time that thought will definitely be in the back of my mind. 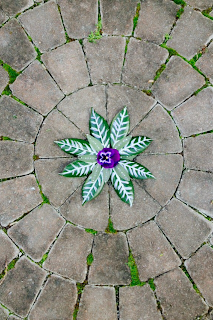 Up Close And Personal:
When given the theme, "Up Close And Personal," I had multiple ideas that I thought would be really cool. I was thinking maybe a drawing of my ipod with my favorite bands or a pair of eyes, one with makeup and one without. But everytime I tried to follow through with these ideas I didn't like the way it looked, so I resorted to doodling in my sketchbook one period and was messing around with the pastels and a tortillon to blend stuff out. And a bunch of people told me it looked really cool and Mr. Sands helped come up with the idea to do feathers. 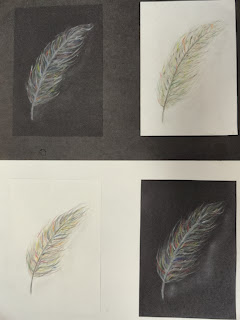 To be honest, I haven't ever really payed attention to feathers but after thinking about them, I realized that they demonstrate up close and personal really well. Every feather off every single animal is different. Not one feather is the same so it makes it personal. I chose to use pastels because they blend really well but also can stand out really well against blank paper. I think the only risk I took was just kind of winging it and hoping my piece turned out okay. I used alot of technique in this because I thought out side of the box when using the tortillon to make the cool feather like design.