To plan for our layering project, Mr. Sands had us write out a list of 20 possible mediums to layer with. I immediately had two ideas, and I knew I was going to do one of them. For a while now I've been wanting to do a sculpture involving scraps of cloth and yarn hanging from the ceiling; I though maybe I could layer them to form a picture from afar. I soon realized that the effort required for such a project would be too much for just one person, so instead I turned to another long-held desire of mine.

Mrs. Koefler, my Art II teacher, often used a clear acrylic gloss to suspend thread, pictures, magazine clippings, and other miscellaneous scraps. After applying layer after layer, she could peel off the dried plastic and have a see-through collage. Because of that, I wanted to experiment with the gloss as well, but I decided to mix it up and try to make it 3D. Inspired by the beautiful colors of fall, I decided to layer leaves, then shine a light through the gloss to reveal the leaves' original colors and the new values created by overlapping.

The first step was to decide which clear gluey substance to use. In other projects involving layering around balloons, Modge Podge has been proven to hold, but I knew gloss would create the thick texture I wanted. So I tried both. After the first day, the Modge Podge balloon had popped and the Modge Podge had crinkled up into something that looked like a ball of Saran wrap.

I decided to go with the acrylic gloss. However, the gloss balloon slowly deflated as well, and I had a problem. Mr. Sands's balloons were too thin and easily popped, and they weren't very spherical either ( I wanted domes of leaf gloss, not balloon shapes). So, I went to the store and bought my own balloons, and for the next few days, I applied the gloss as thick as I could and carefully taped them to different bases. (Pulling off the tape to try to re-inflate the balloons had weakened the latex). 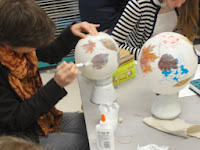 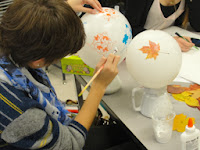 The next challenge was the leaves. I went on several walks and collected many, but applying them directly with just gloss as adhesive didn't work. The leaves were too bumpy, refused to stay, and began rotting fairly quickly. I handily whipped out my flower press and began half-drying and flattening the leaves, and suddenly glueing them on became much easier. For the thicker parts, like the main veins and the stems, I used Elmer's glue. Trying to make one balloon at a time became too tedious; there was a lot of waiting time while layers dried, so I started a new balloon. To add another element, I drew some funky flower-esque designs directly on the balloon, and hoped the ink would stick to the gloss. 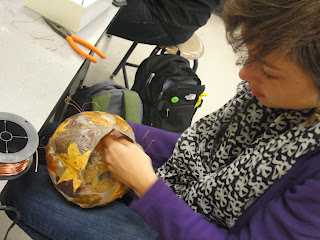 After I had my gloss-leaf layering technique down, the whole project became an experiment. I knew I was making orb-looking things with leaves stuck on them, but I didn't have an image of the final project. As I neared to the end of my layers, I started taking the stems off of the bigger leaves. I thought I could glue them on in little bunches to give the balloons more of a 3D effect. When I finally popped the balloons and peeled them away, the gloss didn't hold its shape as well as I'd hoped. To support it, I tried to make a skeleton out of copper wire, but in the process of hot-glueing it in, the stems began to break off. In the end, I just removed them. 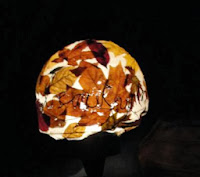 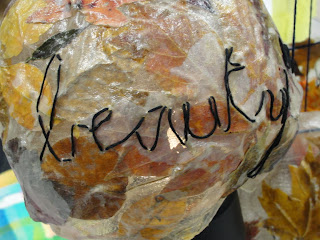 As everything came together, the pieces seemed to lack something -- a definite meaning. Mr. Sands encourages us to make our art illicit emotion and express feeling. Leaves and gloss polymer don't really do that. Personally, I love the colors of fall. To me, they are an expression of nature's true wonder and beauty. When people talk about their dislike of the season because it is filled with death, I am shocked. So, I decided to combine the two concepts. Nature doesn't limp out its death; it explodes in a rain of color, making itself known. There is beauty in that, a beauty in death that is often forgotten. Too often we humans mourn our losses and pity ourselves, forgetting the true wonders that exist in the cycle of life. I embroidered the words "beauty in" on one balloon and "death" on the other to express that.

In order to have the words be read, I decided to have the two balloons on different levels. I balanced one balloon on a light on top of a candlestick on top of a box, and hung the other one from the ceiling. The copper wire inside the balloon allowed it to balance on top of the light without it falling through. When lit up in the dark, the colors of the leaves are revealed.

Although my leaf balloons didn't turn out the way I originally imagined, I like the spontaneity of the shapes. The gloss is fairly malleable, so the shape changes when you push on it. Though my domes aren't perfectly spherical, their lumpy shapes are fun and reinforce the message. Leaving the second balloon without a light also adds to the effect of 'death.'

Time as an Element: Time Heals All Things

For our third project in Art III, we had only one guideline: incorporate time as an element. Inspired by someone else's use of butterflies, my first idea combined chromatography and metal working to create a butterfly sculpture. The wings would be filter paper with marker, and over time water would marble the colors. I also thought of making a giant hourglass and gluing random knick-knacks and whatnot to the bottom, so as time passed the sand would cover them as if they'd been erased by time.
In thinking about this principle, I stumbled on my final idea. Time can erase memories in a negative sense, but the passage of time is also very healing. As time goes on, our anger, pain, and loss are soothed, glossed over, and forgotten. Including an interactive and meditative aspect in my project would allow each person to make it his own and hopefully gain something from the experience.

In designing this piece, I had to come from an unusual direction. Normally the focus in creating art is making it as visually appealing as possible; this time, I had to look at it from an engineering angle.

I wanted people to be able to write in the sand and have their pictures and images washed away, but this meant that I had to have a source of the water and a way for it to run off. The containers had to be waterproof, but also have an aesthetic element. After some planning, I decided on a design that had a box frame with mesh on the bottom to drain the water placed above a 9x9 cake pan which would hold the water. I would then attach a fountain and nail holes in a piece of plastic tubing to disperse the water over the width of the box. I balanced the frame at an angle to the cake pan so the water would drain downhill. 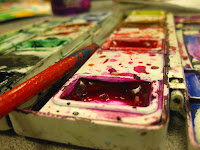 To make the frame more visually appealing, I painted three quotes on the sides: "Time heals all," "'Time takes all, whether you want it to or not' -- Stephen King," and "'You may delay, but time will not' -- Ben Franklin" in white acrylic paint and then stained over the whole thing. Because acrylic paint is water based and the wood stain I used was oil based, the white paint shone through the dark stain to reveal the words.

After all the effort I put into making this project, my original idea failed. The grain of the mesh wasn't fine enough to hold sand the right size; the sand I ended up using was too big to be moved by the water. To salvage the principles I was trying to portray, I turned to water color. Instead of moving the sand itself, I encourage people to paint on top of it. The water eventually would wash it away. This failure demonstrates the risks I took in making "Time Heals All Things." Starting this project, I was creating something that had never been tried before.

I had to be innovative with my materials, taking multiple trips to hardware, grocery, and craft stores to find the perfect fountain or cake pan. I had to redo things several times -- spray painting things made them sticky, and nailing holes in plastic didn't work as well as using an Xacto knife. After much trial and error, my final project emerged. And it worked!

The "Student Spotlight" posts are excerpts taken from our student blogs.

You can see more of Leah's Work Here!
You can see all our student blogs here!
Posted by ian sands at 3:27:00 PM