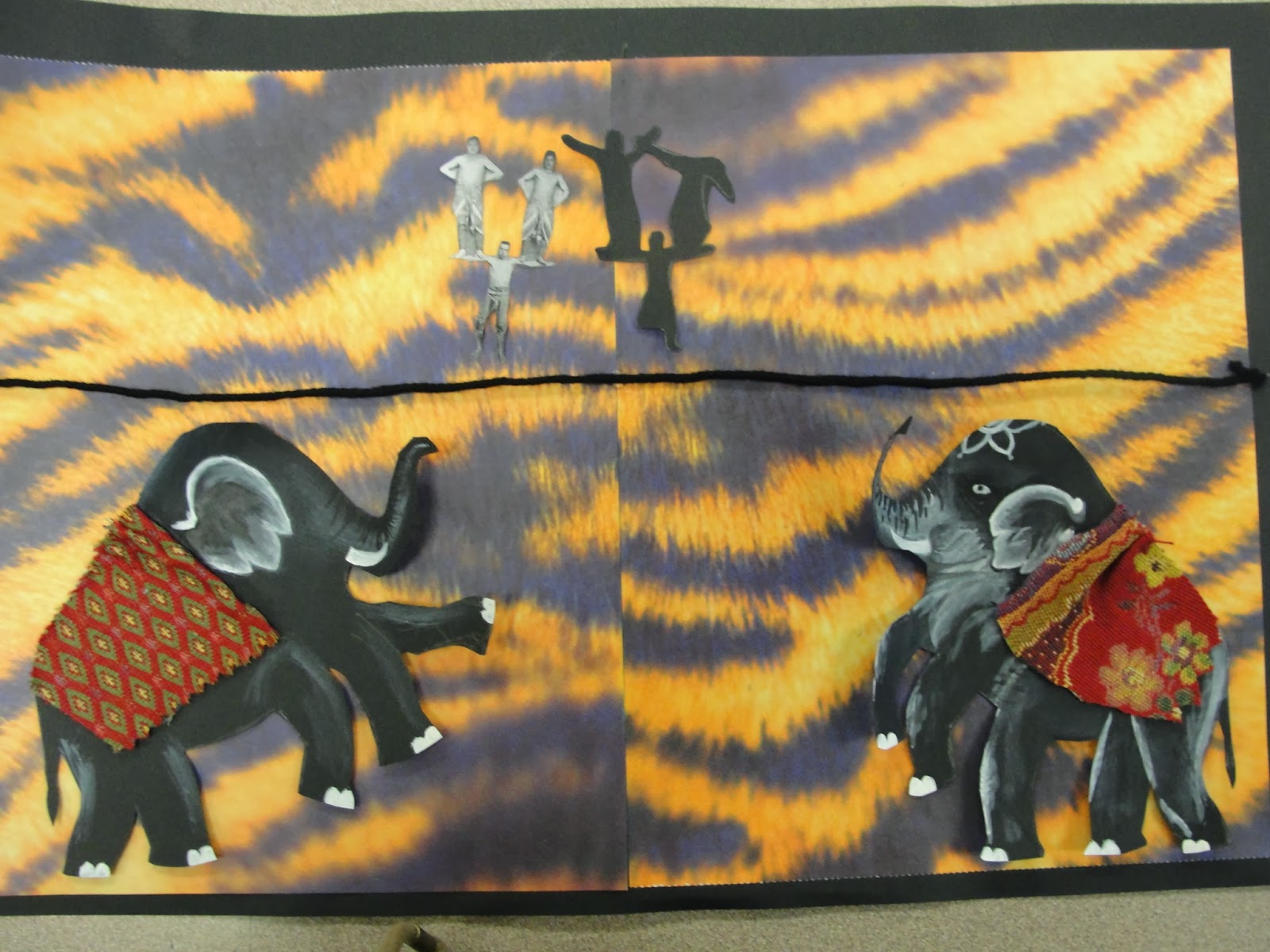 With the tension theme I chose to go with a circus setting, and having people balance on a tightrope on one foot while having two people on their arms juggling chainsaws on fire. So far my materials have been wire, black yarn, fabric, printed paper, and acrylic. I tried to show a symmetrical compositions but putting elements in it that would throw off the balance. For example, the person on the top right is positioned to reach something, because I will later draw/paint in chainsaws on fire, but this juggler lost balance and drops the chainsaw, creating the tension. Also the elephants have different patterned fabrics. The elephant on the left has three arms but the elephant on the right has three legs.

Later I am going to add two more people on the left and right of the tightrope. I am debating where to have them positioned as semicircles or at about 45 degree angles in so their bodies would point to the bottom center of the picture to show the triangle in the composition.Still working.. its taking FOREVER!! 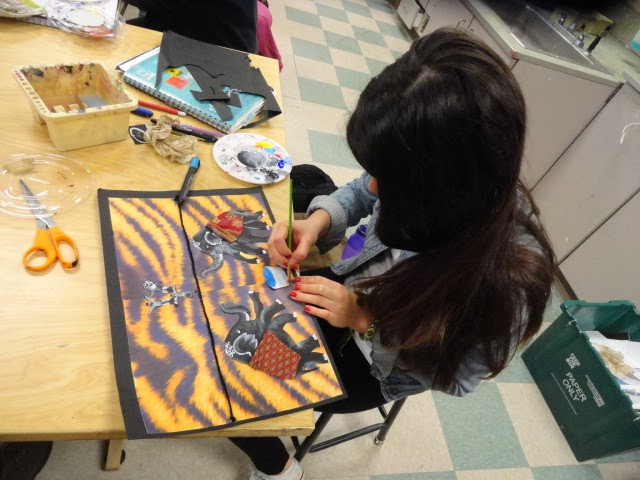 I added glitter glue, and made a candle sort of thing for the ring of fire. 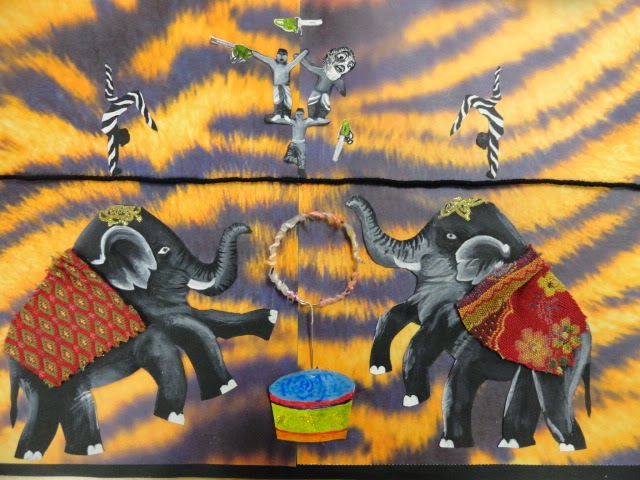 The first try on the candle idea failed... :( 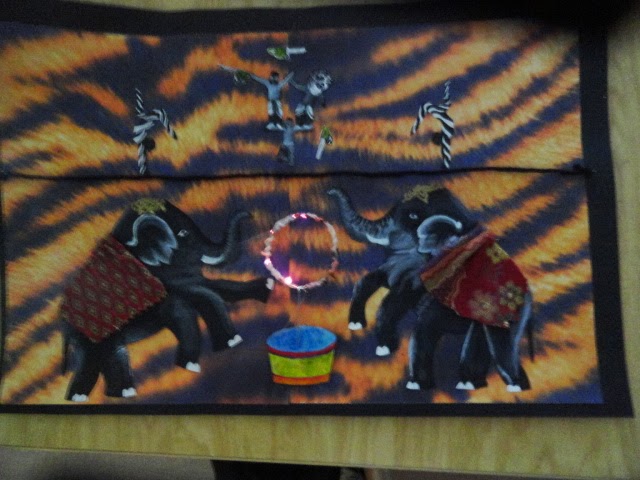 To fix this I tied strings around the ring and went through several coats of wax. I also made sure to make the string wicks longer to make it last and have something thick for the wax to adhere.Yay finally; the fire element worked! 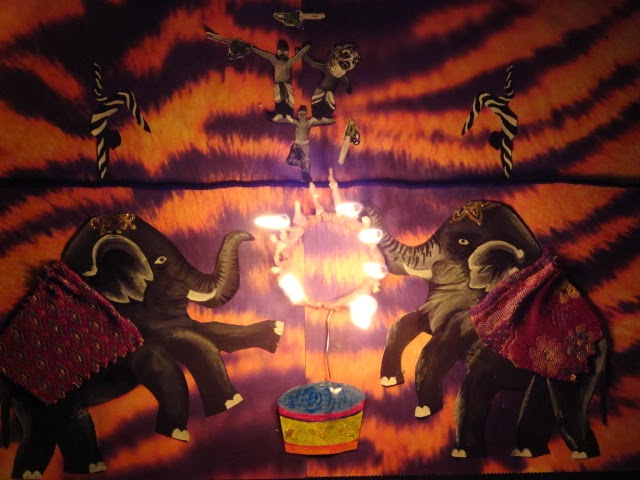 1. Artists take risks:While in the process of creating the design, I loved the idea of the ring of fire. I feel that the ring of fire at a circus adds so much tension. I really wanted to add it to my piece, but I didn't think it was possible. After I finished the actual painting, I thought the project still needed something more. Fire! I went back to thinking more about the fire element. Birthday cakes inspired the design of the the ring of fire. Using wax, wire, and string I made a candle sort of piece to be the ring of fire.This was a big risk because it could have burned my whole project. I had never used any other type of medium than things I could control. Controlling fire can be very dangerous, but it all went smoothly.2. Artists communicate through their work:Conveying the feeling of tension can be taking different routes. Typically disturbing or odd pictures can cause tension. Other times you could paint things thats a big problem. One of my ideas was painting a scene from a third world country, or poverty. Those tense subjects would definitely be see through the art piece. But then when someone mentioned "tightrope"  ideas starting coming. A circus, fire, 5 foot animals, chainsaws, representations of the thrill and tension in a circus. They all create tension in a busy circus that leaves an audience in awe.3. Artists solve problems:As mentioned previously the first attempt on the ring of fire didn't work at all. This didn't make me feeling like quitting on the ring of fire, because there had to be someway to make it work. My motto is "What like its hard?" so I just needed to make a new one. I just melted some wax, got some string, and with the help of Mr.Sans (an expert at candle making) I was able to make another ring of fire before class ended!