Brainstorming
I considered many different meanings of "culture". The first comes to mind quite easily: "the arts and other manifestations of human intellectual achievement regarded collectively," or a "a refined understanding or appreciation/awareness." I thought of language, first- easy to include text as an element. Mythology, fairy tales, and the concept of home holds interest with me. Out of those ideas, I chose to depict a thumbnail of a crowd holding obnoxious signs and flyers for all sorts of religions in all sorts of languages. I could have done a painting of this easily- I love to draw people. But Mr. Sands mentioned the risk factor- and there wouldn't be much of one if I drew people. So I changed my angle entirely. Culture can also mean "the cultivation of bacteria, tissue cells, etc., in an artificial medium containing nutrients." This was far more original, and didn't lead me into people or painting. Petri dishes came to mind, and I first imagined seven petri dishes in a row, with wooden vertical letters spelling out "CULTURE", with newspaper cuttings "growing" out of the dishes. This changed after I dug around in my craft drawer. I disliked the only letters we had, and I thought such an installation would be flat and too obvious.

Experimentation with petri dishes (borrowed from a science teacher) and my camera led me to believe I needed more. I couldn't just cut out the wooden letters- it looked too empty. I played around a lot with light sources and arranging the cut newspaper to reveal certain things about culture, while being "culture".

I found a large marble in a drawer and liked that it could perhaps represent a world figure. Feeling like I had to add something about the culture play on words, I added the beads from my jewelry-making drawer. I continued to play around with different angles and shadows in my photography. Decided last minute to place little beads in each of the petri dishes. The yellow and blue ridged beads reminded me of an African beaded necklace, and the painted beads in another dish reminded me of Native American culture. So although I decided to hit the "Culture" theme at a different angle with science, I did end up including the other definitions. 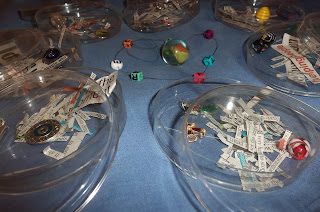 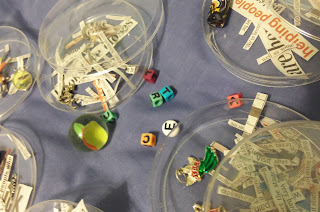 For the presentation on "Feel Good Friday," I didn't arrange anything in the dishes, so they remained slightly shaken up from the ride to school. Part of that was lack of time to fix it. But I think the effect was not diminished. After deciding not to include the beads spelling out culture, I ripped out the notebook paper and used that instead. While it may not have been as crafty, I felt its presentation and photogenic qualities were better over all. The project didn't challenge my skills at all, but I've never made an installation before, and I think I conveyed a successful and clever message through my project. So. A bit risky. I enjoyed the experience. /besides breaking two of the dishes

The title "Here Again" is featured most prominently in the picture below left. Culture is a thing that has stayed with us for as far back as history dates. So, it's here. Again. 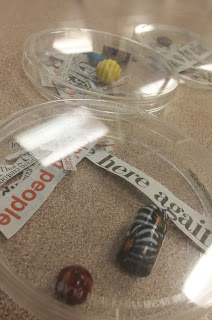 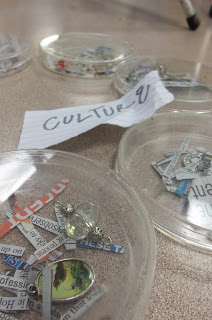