3D Printing on the Makerbot 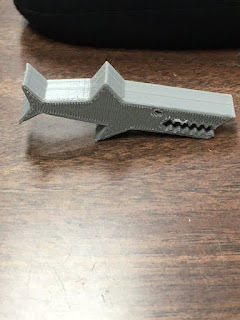 Look at that! It's a shark! Pretty exciting, I know! OK maybe not that exciting if you don't know the backstory. So let me tell you a tale of the 3D printer.

Back in November I received an email from the folks in the Media Center. It was from Makerbot. They were holding a contest. Whomever had the most retweets that used the Makerbot hashtag would win a 3D printer. I decided to tweet and asked my students to retweet my tweet.

We had a pretty good first day with around 200 tweets. In fact, we had more tweets that anyone. I started thinking, maybe we could win this thing.

Then the next day, I saw that another school had passed us. The had over 250 retweets. I was like, on no you didn't! So again I asked the students to ask their friends to retweet... 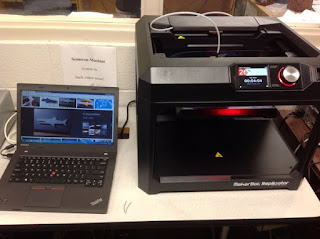 We went from 200 to over 500 retweets in a day! Long story short, we won the printer! It came in a box a few days ago. This morning I decided to see if I could set it up. I did and it work! (See shark above).

Now the fun can really begin. Stay tuned to see what we build this semester.
Posted by ian sands at 12:41:00 PM